I took most of today to rest, as the fatigue was catching up with me. A group of us walked to a café across the road to fetch breakfast, which we brought back to The Faculty Club to eat at the long tables in the dining room. I love the atmosphere of this building and the surrounding gardens. If someone could transport this whole place to Perth for me that would be great!

I went back to bed for a few hours in the middle of the day, then spent the afternoon reading and listening to the goings-on outside my window. Others trekked into San Fran for one last hurrah or went to meetings with academics.

In the late afternoon/evening we attended a graduate admissions information session and a mixer with some of the graduate students here. It was interesting to hear about their different fields of study. All the Scholars are getting very good at their elevator pitches; I’ve started watching people’s responses for any surprises. Guests are always very interested in those of us incorporating culture in our studies—that doesn’t include me at this stage, but hopefully when I’m back home I can make the most of my family’s knowledge and start my own cultural learning journey!

This evening I had a lovely dinner with two of the other Scholars, the scholarships coordinator, and Richard. I ate four ribs and a lot of kale salad and a lot of cake! And finished it all off with a nice cup of tea.

We have to be down in the lobby at 4.50am for our ride to the airport, so I’m going to jump in the shower and head to bed. This time tomorrow I’ll be writing from New York!

A t-rex skeleton in the Sciences building! (I love dinosaurs)

Today was supposed to be another busy one, but the fatigue hit hard. We had a tour of the campus this morning followed by a lunch hosted by the American Indian Graduate Program. Two presenters discussed their research into Native American culture and history—there were many parallels between their struggles and those of Indigenous Australians.

In the early afternoon I met with a graduate advisor from Berkeley’s English department, and had a nice chat about the program and campus life. Unfortunately I don’t think this one is a good fit for me, which is a shame as I absolutely love the campus. The focus of the course is a bit too narrow for my liking; I’d really love to explore the intersection of science and writing in my PhD, and I don’t want to be limited to only literature.

But there are plenty more universities to visit on this trip! And plenty more opportunities to learn about amazing courses.

I had a nap in the afternoon and woke up in time to go to a lecture by Professor Stuart Russell, who is a computer scientist who specialises in AI, and whose work I cited in my thesis. His talk was fantastic and I’m so glad I got to go. Like most AI researchers I’ve heard of, though, his view of the development of AI leans a little on the utopian side of things. I left the lecture with so many new sf and sci-comms ideas.

We had a group dinner at a restaurant 15 minutes’ walk from The Faculty Club, then grabbed an ice cream from down the road before hopping in an uber back to the Club for an early night.

Oh, and I just sent an email to MIT asking for a meeting while we’re in Boston… eep!

This little guy delivers food around the campus!

Today we travelled from Stanford to Berkeley, and I took some time to finally have a proper rest. Others went off adventuring in Palo Alto and San Fran, or explored the areas around the Berkeley campus.

Berkeley is stunning. We’re staying in the guest rooms in The Faculty Club, which is a beautiful set of connected buildings nestled within a small grove of trees and lush lawns. The interior features wood-panelling, dim and moody lighting, plush armchairs and cute reading nooks. I am in love with the place.

This evening a small group of us went in search of ramen, and were served Maggi two-minute noodles with some chicken and veg added. We were not impressed. But then we found Tammy’s Chicken in Waffles, which is this cute little waffle place run by a trans woman who has fought her way up from homelessness to successfully running two businesses and supporting her local trans community.

The campus here is so beautiful. It’s a lot more organic and free-flowing than Stanford. And oh my gosh, the library. The library. They have a small reading library on the main floor which honestly looks like something out of Harry Potter, and upstairs there’s a massive hall filled with desks where students sit and read their textbooks. No sound allowed. One of the other Scholars took a photo for me and the click of my camera was enough to send grumpy looks our way.

This evening I’m relaxing in bed and reading while a men’s choir sings in the room beneath us and one of the other Scholars rushes to finish her thesis. Tomorrow evening I’m hoping to attend a lecture by Professor Stuart Russell, a computer scientist whose work I cited in my exegesis!

What an amazing place. 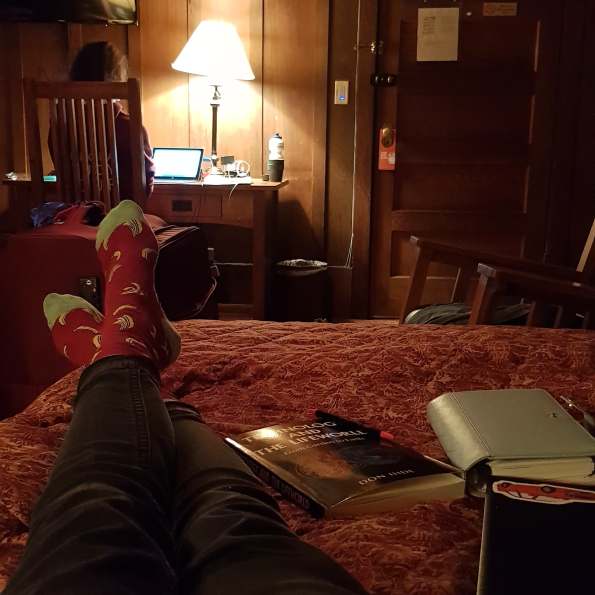 Our room in The Faculty Club at UC Berkeley