I had brunch at Fitzbillies down the road with one of the other Scholars, and it was delicious. And the coffee actually tasted like coffee, unlike whatever we had been drinking in the US.

At about noon my big day started in earnest. I set off in search of bridges.

My first stop was Mathematical Bridge, a gorgeous little wooden structure crossing the River Cam between the two halves of Queen’s College. I then walked back through Cambridge and stopped in at a cute little jewellery shop and the Cambridge University Press book shop before purchasing visitor’s entry to St John’s College to view the Bridge of Sighs. It’s a covered stone arch bridge which was built in 1831, and is named after the Bridge of Sighs in Venice.

I also stopped by the Round Church (it’s a church… that’s round), though I didn’t go in this time as I had other things I wanted to tick off my list. I climbed the bell tower of Great St Mary’s Church, from where I had clear views of King’s College to the west, Cambridge markets to the east, Trinity College to the north, and Corpus Cristi college to the south.

Then it was a short walk to our afternoon tea in Christ’s College, where we ate delicious snacks and sandwiches, and our host—Master of the College Jane Stapleton—let us sit in Charles Darwin’s chair and hold Alexander Todd’s Nobel Prize!

Two of the other Scholars and I ate dinner at the Eagle, the pub where Francis Crick and James Watson announced their discovery of DNA’s function in 1953. On the walk back to my accommodation at St Catharine’s College we passed the Corpus Clock, which was inaugurated by Stephen Hawking in 2008 (it features a little beastie atop the gold-plated main face dubbed ‘the chronophage’—literally “eater of time” in Greek, thanks Wikipedia—by the clock’s funder John C. Taylor).

Overall a very science-themed day! And I have been promised a visit to Einstein’s chalkboard when we are in Oxford. Excitement! 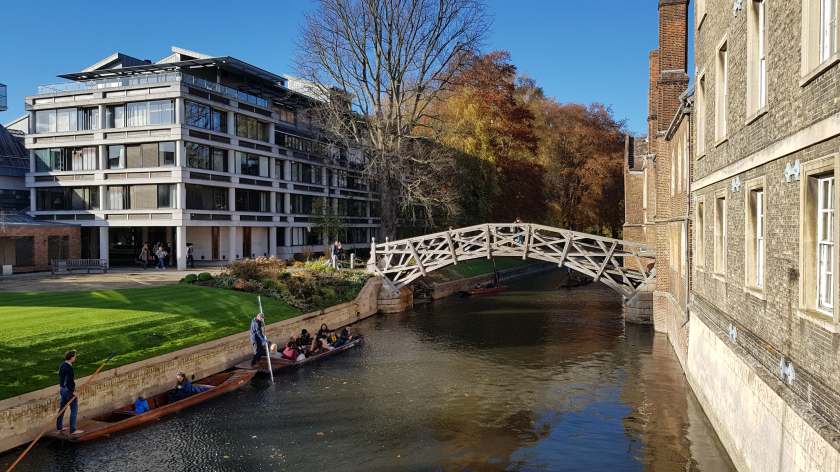 Mathematical Bridge. Unfortunately I couldn’t cross it, but I still enjoyed admiring it from a distance!

The Bridge of Sighs.

View of King’s College from the roof of the Great St Mary’s bell tower.

Oh. And I learnt that one of the other Scholars on the tour is related to me. Hi Aunty!